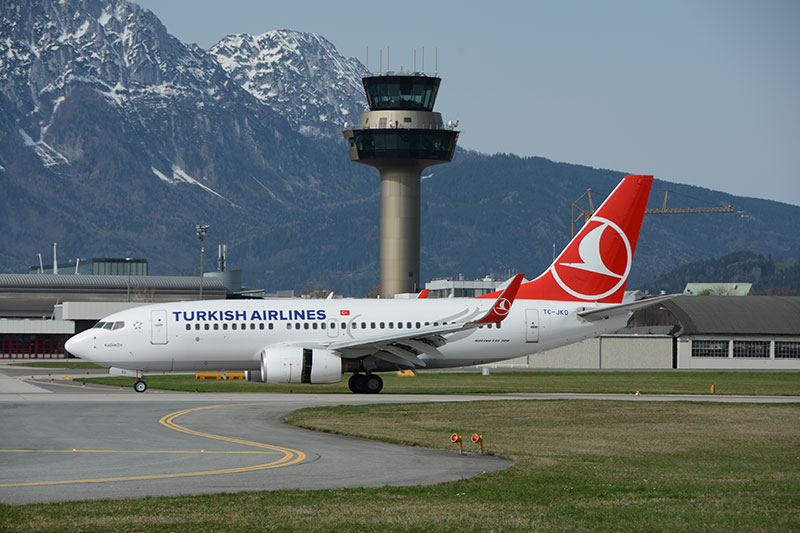 Dostça karşılama Salzburg – “Welcome to Salzburg” was the motto on Mai 28th 2013 for the first Turkish Airlines-flight landing in Salzburg from Istanbul. The Turkish-European Metropolis not only offers a great number of connecting flights within Turkey, but also numerous international destinations in the Middle East, India, Pakistan, the Far East, Africa and North- and South America.

During the last 5 years, Turkish Airlines was not only able to establish successful point-to-point-traffic, but also many international guests use this popular route to come to Salzburg. Over the last few years especially the share of Asian customers increased significantly. Being a part of Star Alliance, Turkish Airlines is able to offer flight connections around the world.

“In January 2015 the Turkish National Carrier flew the 100.000th passenger to Salzburg. 3 years and 128 days later, we can congratulate our reliable airline-partner on having transported nearly 350.000 passengers – with a rising trend. Even though we have experienced some turbulent times, the airport, the regional economy, industry and tourism could always rely on Turkish Airlines and in the future we count on Turkish Airlines as a strong partner, when planning international flight connections which are offered all year round”, says Bettina Ganghofer, CEO of Salzburg Airport.

Top Quality, best service, fair prices and a worldwide route network with numerous connecting flights via Istanbul, modern and environmentally friendly aircrafts and winner of international prizes – that is what Turkish Airlines represents.

The Turkish Airlines success story
In 1933 Turkish Airlines started with no more than 5 aircrafts. Today the Turkish National Carrier has a state-of-the-art fleet with 327 aircrafts. Following an impressive period of growth, Turkish Airlines has become a top-airline globally. The carrier plans a decisive milestone for the end of 2023: to increase the number of cargo- and passenger-airplanes to 500. Turkish Airlines has invested more than 500 million US-Dollar to establish one of the most modern maintenance centers at the airport Sabiha Gökcen in Istanbul. Expectations are high, since an annual revenue of 1.5 billion dollars is targeted. The Turkish government even plans to invest in aircraft production themselves.

Skytrax Awards
Turkish Airlines has been a member of Star Alliance since April 1st 2008. Since then, the airline has focused on growth and profitability and significantly increased the quality of service offered. Besides several awards by the well-known organization Skytrax, Turkish Airlines was honored by a number of leading organizations worldwide.

Since their first flight from Salzburg to Istanbul, Turkish Airlines has transported nearly 350.000 passengers on this route