A New Runway For the Airport! 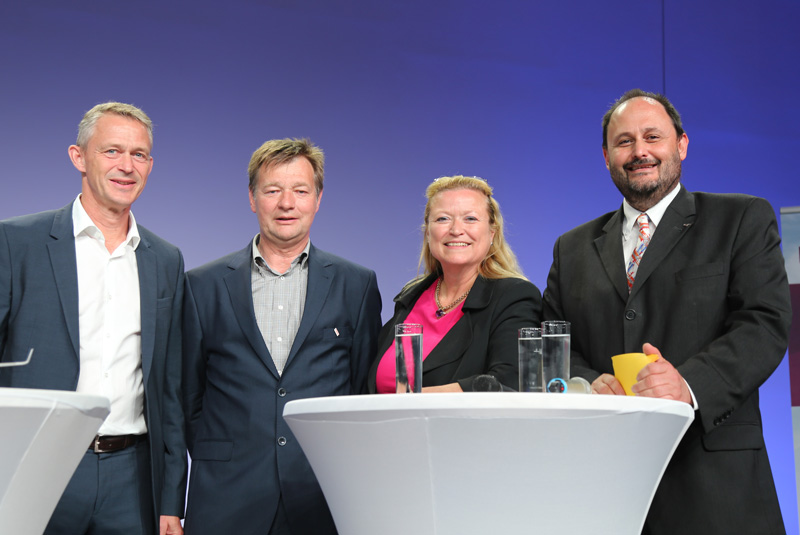 „If the weather is kind, anyone can do it“, was the motto of team refurbishing the runway, above all Florian Höll, Project Manager of the airport and Helmut Atzlinger, CEO of Strabag/Porr.

„Five weeks are definetely enough! During the last few weeks our passengers have been peppering us with questions, especially, if we are able to confirm that the re-opening of the runway will be on time. People simple want to fly abroad – practically at their front door. And our business customers also look forward to being able to reach the airport within minutes again”, says CEO Bettina Ganghofer.

On May 28th at 9pm sharp finally the first aircraft – a Eurowings-Airbus from Stuttgart – landed on the freshly renovated runway at Salzburg Airport – quite a good reason to celebrate!

“I have been able to watch, what a highly motivated and well-established team can achieve! Quite honestly I am relieved that it is over and that I will be able to go on vacation for a couple of weeks. But, looking back, I must say that I am more than proud of the project and all the people involved”, says Project Manager Florian Höll.

„I am very pleased that the airport is re-opening. I cannot emphasize often enough, how important the airport is for the entire region. I would like to congratulate the airport, Strabag/Porr and the entire construction crew”, says Chariman of the Board, Christian Stöckl.

Well, the weather god did not mean well with us! To recite the motto we had for the construction project: “When the weather is kind, anyone can do it!”
This fact caused several sleepless nights for Helmut Atzlinger, CEO of Strabag/Porr: “The weather definitely was not kind with us, but we did not have time to let this stop us. We had a very special road to build and we managed to do so – even for us a unique project. It was an enormous challenge for the entire team to construct a runway using 117.000 tons of asphalt in record time”, says Helmut Atzlinger.

Deputy Director Rudolf Lipold together with his team started to plan the project in 2016. If you want to realize a project this size successfully, you have to start planning years before. Every detail, emergency plans, traffic concepts, accompanying media work and information for neighbours – everything needs to be thought of and planned in detail.

„I am deeply impressed to see what great work has been accomplished here, especially, when you think of the bad weather”, says Deputy Director Rudolf Lipold. All my project managers and Helmut Atzlinger have achieved something really incredible and I would like to thank them all for their hard work.”

Beside the construction site of the runway, the five-weeks-closure of the airport was used to do maintenance work in and around the terminal. The ventilation and smoke evacuation systems were renewed and fire protection measures arranged. Shops in the terminal building were renovated and the surface drainage of the parking area P1 was renewed.

Beside the first landing of the Eurowings aircraft, there were some other hightlights at the occasion of re-opening of the runway, for instance a panel debate giving media representatives the chance to get more insight in the refurbishment of the runway. CEO of Salzburg Airport Bettina Ganghofer, CEO of Strabag/Porr Helmut Atzlinger and CEO of Lufthansa CityLine Michael Knitter (Eurowings) were their conversation partners.

Eurowings was the first airline to land on the refurbished runway

A water arch for the first Landing

The two project managers now have time to celebrate

Despite the rain, the Crew enjoyed the party