Salzburg Gets Back the Flight Connection to Berlin Tegel 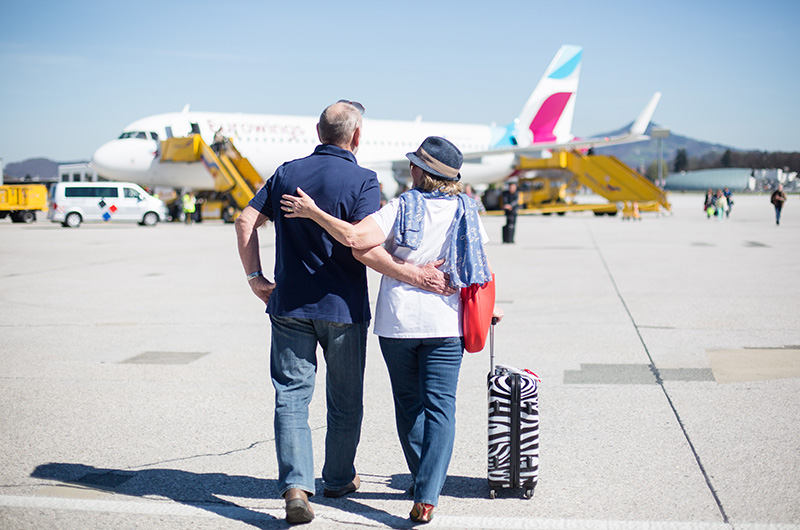 In 2017 Eurowings started its second base in Austria, here in the city of Mozart, as a very promising airline-partner and since then has gradually been expanding its route network. Less than a month ago the Lufthansa subsidiary celebrated its first anniversary at Salzburg Airport. More than 420.000 seats have been offered to Salzburg to date. Unfortunately the flight services to Berlin Tegel (TXL) were cancelled following the insolvency of the German carrier Air Berlin. These flight connections were much sought-after and well booked by business travellers and passengers, who flew via Berlin to destinations all over the world.

“Being patient and persistent and woring hard in the background”, was the motto of the past few months – and it has definitely paid off! Salzburg got the so vital early morning connection with a return flight available in the evening back” rejoices Bettina Ganghofer, Managing Director of Salzburg Airport.
A bombardier DH-8Q-400 with 76 seats will fly passengers to the German capital twice a day from Monday through Saturday and once a day on Sundays. In less than an hour you can reach Berlin Tegel from Salzburg.

After Air Berlin und Niki, two of our airline partners had gone insolvent, it was quite challenging for the airport-team to develop new strategies and to tie airline-partners to Salzburg Airport. We are all the more pleased that Eurowings is able to offer new flight connections within the European route network, which passengers from the entire region will clearly benefit from”, says Deputy State Governor Christian Stöckl.
The flights to Berlin are a positive sign for the future and important for domestic economy, industry, tourism and the people in the region of Salzburg. At the present time it is more important than ever to quickly reach German and European metropolises from Salzburg.
“The new flight connection to Berlin Tegel is a real motivation boost for all of us. We are very pleased that Salzburg was able to be part of the Austrian Eurowings success story. And we are looking forward to realizing further future plans together”, says Bettina Ganghofer.

Eurowings – A Success Story in Salzburg

Eurowings is a subsidiary of Lufthansa and specialized on cost-effective direct flights within Europe as well as long-distance destinations from the hubs Cologne/Bonn, Munich and Dusseldorf. Every passenger can create their own individual flight with the following fares: BASIC, SMART and BEST. Eurowings is currently flying to more than 160 destinations in more than 50 countries worldwide. From Dusseldorf you will find long distance flights to the Caribbean, New York, Fort Myers and Miami. In January 2017 the Austrian airline started their flight program from Salzburg to Brussels, Paris and Hamburg and expanded their flights to Cologne/Bonn to daily flights. The summer timetable offered mainly sunshine destinations in the Mediterranean like Olbia (Sardinia) or Palma de Mallorca. Summer 2018 offers additional flights to the Greek islands Kos, Kreta and Rhodos. The current winter flight program focusses on Great Britain, including Birmingham, Manchester, London Stansted and London Heathrow. In addition passengers can fly from Salzburg to the German city Bremen.

Fly from Salzburg with Eurowings

In addition Eurowings offers flights from Salzburg to Berlin, Dusseldorf, Hamburg, Brussels and Paris as well as several sunshine destinations in the Mediterranean. The flight program includes a number of Greek islands such as Kos, Rhodes, Korfu or Crete as well as Olbia/Sardinia, Calvi/Corse and Palma de Mallorca. Don´t wait any longer and book your vacation online or in your travel agency you trust!

Salzburg gets back flight connections to Berlin Tegel