Salzburg Airport: 2017 Was a Successful Year 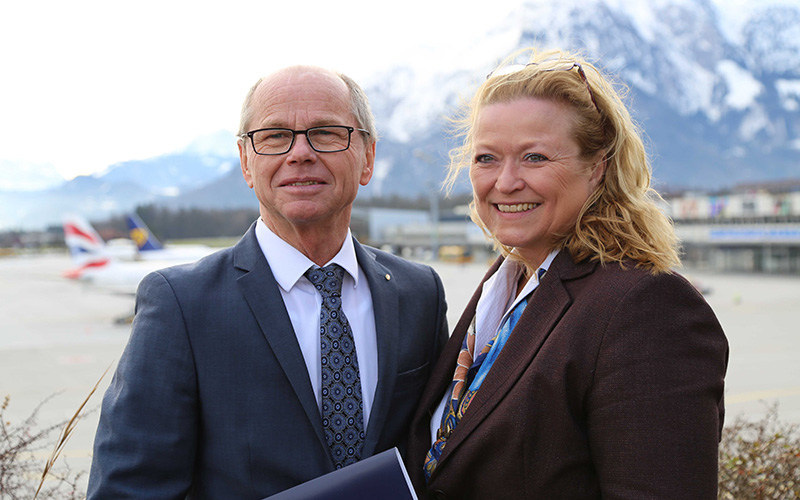 What more could you ask for, when looking back at a positive business year and looking to the future with optimism? In the past year almost 1.9 million passengers flew to and from Salzburg. We were able to significantly strengthen our position as the largest regional airport in Austria. 2017 was a year of upheaval in the aviation sector – just think of the insolvency of Niki and Air Berlin - as well as changes for the EuRegio-airport Salzburg with a change of the Managing Director.  In a multistage selection process, Bettina Ganghofer  was appointed sole Managing Director of Salzburg Airport”, says Deputy State Governor Christian Stöckl.

“I am very pleased to have this opportunity today to greet all the people in Salzburg and neighbouring Bavaria. I would like to thank everyone at Salzburg Airport and in the region of Salzburg for the warm welcome. It is an exciting challenge – especially during these eventful times - to lead the airport into a secure future. I am happy to take up this challenging position with a lot of energy, new ideas and a great team at the airport”, says Bettina Ganghofer at her first press conference as sole Managing Director of Salzburg Airport.

An independent panel of experts appointed Bettina Ganghofer as Managing Director of Salzburg Airport. Among a great number of competitors, Bettina Ganghofer was chosen to run the company in the future. After her training to become an aviation saleswoman, Bettina Ganghofer has become an expert in the aviation business and knows all the different departments at an airport, but also air traffic itself inside out. Before the new Managing Director relocated her entire life to Salzburg, she lived in Leipzig (Germany) with her family. During the last eight years, Mrs. Ganghofer worked for the Mitteldeutsche Flughafen AG. She started her career in the Lufthansa group, where she got to know the aviation industry extremely well, both in Germany and abroad.

The past year was marked by deep upheavals in the aviation sector. Many well-known airlines like Monarch, Etihad Regional, Air Berlin or Niki were forced to file for insolvency. Despite the difficulties European tourism and the aviation business were facing, Salzburg was able to handle 1.890.164 passengers last year – an increase of 8.7% compared with the previous year. Passenger figures in scheduled services increased by 10.2% to 1.513.741 passengers. The charter-outgoing sector increased passenger figures by 6.6%, the charter-incoming sector slightly decreased (-0.1%). The number of commercial aircraft movements increased by 10% to 19.479 (16.065 thereof scheduled flights +10.4% and 2.852 touristic traffic). The cargo sector also shows a positive development (+6.2% and 12.673.414 kg for both air freight 228.331 kg and truck transportation 12.445.083). The so-called MTOW (maximum take-off weight) is – from an economic viewpoint - an interesting figure for an airport. It´s crucial for financial performance and could be raised by 9.3% to 571.397 last year.
Not only the management and the financial department of the airport, but also its owners are delighted with such figures.

“It´s true the past year ended with the insolvency of Air Berlin and 2018 has begun with a difficult transition for the carrier Niki searching for suitable new owners, but here in Salzburg we look to the future with optimism. The start into the winter season was successful and is promising good results. Next summer we are offering – beside the scheduled flight programme - wonderful sunshine destinations in Greece, Bulgaria, Turkey, France, Spain and Italy” comments Bettina Ganghofer on the current financial year.

The flight connections to European metropolises such as Frankfurt, Düsseldorf, Berlin, Cologne, Istanbul, Palma de Mallorca and Amsterdam (Skyteam, third aviation alliance in winter) and London (several airports) are essential for Salzburg Airport and the region of Salzburg. In addition to the scheduled flight programme, you will find a wide range of flight offers to destinations in the Mediterranean. The traditional incoming traffic is especially important for the region, because it brings tourists and business people to Salzburg and Bavaria. A great number of international guests fly into Salzburg to reach their final destination in the summer- and winter resorts in the region, which leads to a significant indirect profitability in the region of Salzburg and neighbouring Bavaria.