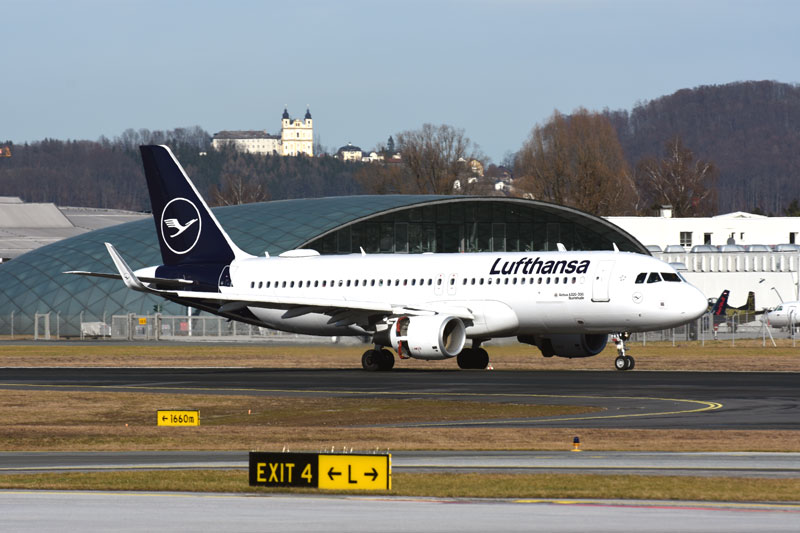 Before COVID-19, 4 daily flights were offered to Frankfurt from Salzburg

In December 2019 Lufthansa took over the connection Salzburg-Frankfurt/ Before Stand-by-operation became necessary due to COVID, up to 4 daily flights were offered to Frankfurt/ Lufthansa subsidiary Eurowings is the second most important strategic partner/ important and positive signals in times of crisis

For Salzburg Airport taking over the Austrian Airline’s flights to Frankfurt by the Lufthansa Group, was an absolute stroke of luck and a positive signal for the location. Larger aircrafts and a higher seat capacity were just two of several advantages, which passengers could expect flying to Frankfurt. For years Lufthansa together with its subsidiaries is the most important strategic partner for Austria’s largest regionl airport. „Cohesion, a reliable partnership and a carefully optimistic look ahead, are what connects the airport with the Lufthansa group. We have always been able to rely on our airline partners, even during a crisis. Therefore, we would like to say thank you, because despite facing all of today´s challenges, we are already building tomorrow´s future together”, says Bettina Ganghofer, CEO of Salzburg Airport.

With the winter flight schedule, the number of flights will be raised! In the future, Lufthansa will offer two daily flights from Salzburg to Frankfurt..

When the last flight before starting stand-by-operation took off to Frankfurt on March 18th 2020, nobody knew how long Lufthansa would suspend flights to Salzburg. On July 1st 2020, Lufthansa finally landed at Salzburg Airport again, transporting passengers via Frankfurt to their final destinations worldwide. Strict travel rules, quarantine requirements, border closures and landing bans made travelling in times of Corona more difficult, which also caused the demand to decrease significantly. Since July, Lufthansa is offering an average of 7 flights per week from Salzburg to Frankfurt and these are well booked. This allows passengers to reach more European and intercontinental destinations via Frankfurt.

Beside the parent company, we also need to mention a second, very important partner: Eurowings. Eurowings established a second Austrian base in Salzburg, basing an aircraft here in January 2017. The German carrier then offered an attractive mix of 10 sunny as well as city destinations from Salzburg. Two further aircrafts were to be based in Salzburg in 2020, until – COVID scattered these plans and aviation had to change in thinking. After stand-by-operation, Eurowings was the first airline to restart services between Salzburg and Dusseldorf again, allowing a restart of the connectivity within the entire Eurowings network.

Beside the important flights to Dusseldorf (up to twice a day), Berlin (4x weekly) and Hamburg, (5 weekly flights), services to Cologne will be operated again (4 weekly flights).

Due to the current situation caused by COVID-19, we recommend that all passengers should check the current status of their flight prior to departure with their airline or the airport.

Lufthansa is looking back on a history with major challenges. The first Lufthansa was founded in 1926 and liquidated in 1951 by the Allies. No more than two years later, on January 6th 1953, the „Aktiengesellchaft für Luftverkehrsbedarf (Luftag) was founded with its base in Cologne. A year later the Luftag bought the name as well as the trade label, the Crane, from the first Lufthansa and renamed itself „Deutsche Lufthansa Aktiengesellschaft“. While expanding the European network, destinations in America, Africa and the Far East were operated to. In 1997 Lufthansa was privatised. About 138.000 employees work fort he company. In 2019 the turnover was more than 36 million Euros. The Lufthansa group as Europe’s most important airline aims at significantly shaping the global aviation market.

In times of crises, Lufthansa sets a positive signal in Salzburg