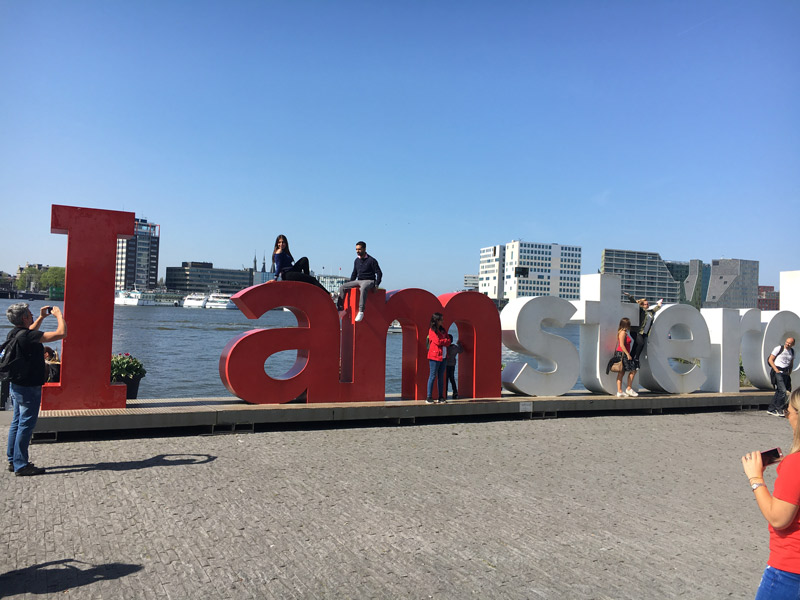 Every visitor to Amsterdam knows the distinctive lettering "I love Amsterdam"! Arriving at Schiphol Airport, visitors can hardly miss the letters. The huge lettering have become a symbol of the city and a very popular photo motif. Now the letters have been moved to draw the attention of tourists to parts of the city that are less well known.

This year-round flight connection to the Dutch metropolis is absolutely godsend, as Transavia will now transport passengers to the Amsterdam hub in a codeshare and thus within the network of KLM/Air France and the Skyteam alliance. "Transavia has been a loyal partner for our winter tourism in the Province of Salzburg since 2012, and this will now change with the all-year-round connection to the Amsterdam hub. From now on, Amsterdam will now serve as a stepping-stone for global flight connections in summer as well as in winter. The fact that we can now use Amsterdam as a hub noticeably expands the range of destinations," says Isabella Laimer, Vice President Marketing & Sales at Salzburg Airport. For more than 50 years Transavia has been flying tourists as well as business travelers to more than 110 destinations. “When launching routes like this, we face competition throughout Europe and we definitely have a significant advantage thanks to our beautiful region”, Laimer continued.

The connection to the Dutch metropolis is not only important for tourists and business travelers who want to go to Amserdam or continue to travel onwards. The Dutch are the most important vacationer group for SalzburgerLand, just behind Germans and Austrians. These guests can now also travel quickly and easily by air throughout the year. First-class ski resorts in winter, hiking in summer, biking and swimming in SalzburgerLand at our beautiful lakes or shopping in the old town - Salzburg offers something for every taste. "The city of Salzburg and its beautiful surroundings offer everything it takes for a relaxing and enjoyable vacation," Marcel de Nooijer, CEO Transavia, is also convinced.

Transavia
The Dutch airline with low fares was founded in the Netherlands in 1965, still under the name Transavia Holland. Since 2003, Transavia has been a subsidiary of KLM, which in turn is part of the Air France-KLM-Group. The preferred destinations are in the Mediterranean region. In 2019, Transavia carried more than 16 million passengers. Transavia has 40 aircraft in operation, of which 35 are Boeing 737-800s and 5 are Boeing 737-700s.

Experience Amsterdam
The port city of Amsterdam has about 830,000 inhabitants, is located in the province of North Holland directly at the mouth of the Amstel River and is directly connected to the North Sea. Absolutely recommended, especially if you visit Amsterdam for the first time, is a trip with one of the many excursion boats through the canals of Amsterdam. Cuyp Market, located right in the center of the lively De Pijp neighborhood, is one of the largest and busiest markets in Amsterdam. The historic Spiegelkwartier district, with many old canal houses, is home to over 70 specialized art and antique dealers. The Dutch capital is well known for its vibrant nightlife as well.