Restart of flights to summer destinations 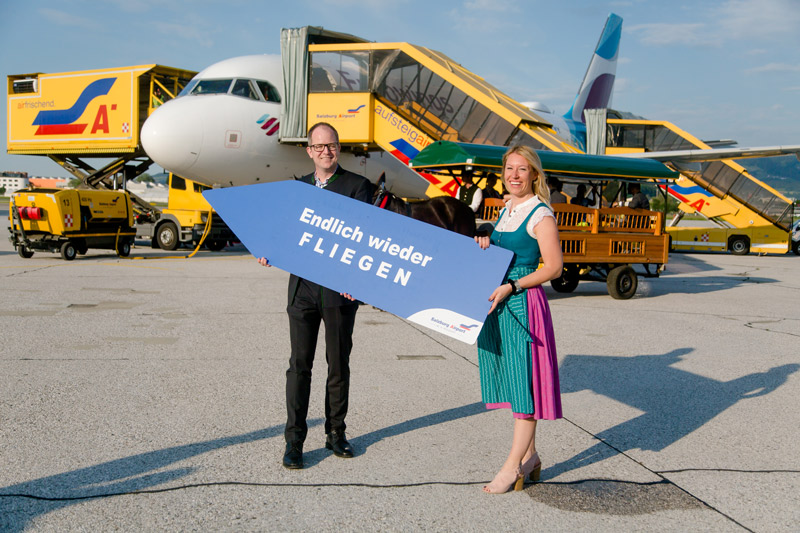 Eurowings takes off at Salzburg Airport

Holiday mood among passengers / Finally again holidays from Salzburg / Beside the summer routes, scheduled flights will also return / To the plane by horse-drawn carriage / Airport and crews look forward to passengers

The past weekend showed quite forcefully that the people of Salzburg and Bavaria finally want to spend their vacations on the beach and by the sea. Austria offers a wonderful holiday paradasie, but at some point your "own four ewalls" become narrow and we feel the urge to go out into the world.

The last few months were not easy and so now the suitcases are packed quickly and destinations such as Greece or Spain easily reached. "With a lot of anticipation in their luggage and relieved that the travel restrictions have been lifted for the most part, our first passengers took off this weekend! But it wasn't just the passengers who were thrilled; the crews of the Eurowings planes were just as happy about the start toward normality. At the end of June, we will also revive many Germany connections such as the Lufthansa HUB Frankfurt. However, in order for our flight connections to Turkey, the UK and Arabia to take off as well, we still need a clear and positive entry regulation - which we are now hoping for vigorously. We are definitely picking up speed again and hope for a favorable tailwind," says authorized officer of Salzburg Airport and Head of Traffic & Sales, Christopher Losmann.

For the moment, the focus is on vacations by the sea. Below impressions we captured on the first few flights landing in or taking off from Salzburg.

The first crews were welcomed

Going to the plane by carriage

Many passengers on the flights to Greece and Spain

Looking forward to a relaxed vacation