Second Eurowings-Airbus Based in Salzburg 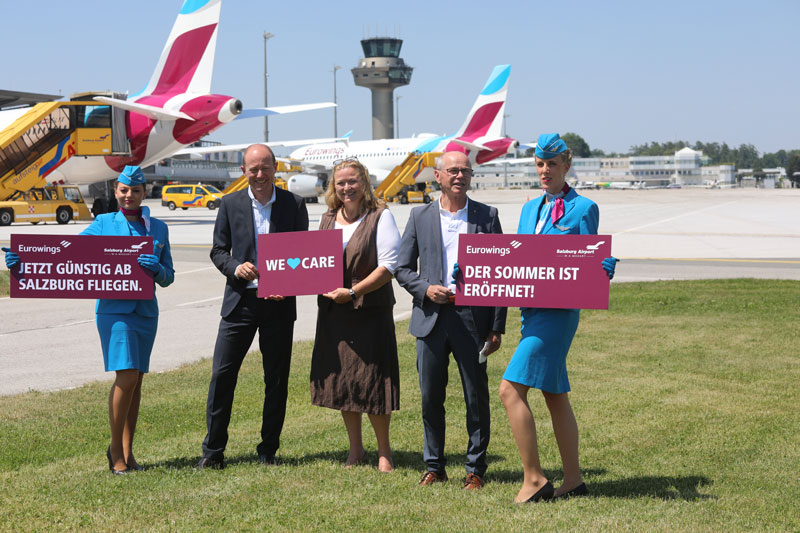 Today is a happy day for Salzburg Airport, as the airport's strongest airline partner, the German Lufthansa subsidiary Eurowings, is basing its second Airbus in the city of Mozart. The transfer flight coming from Palma de Mallorca landed at 2 p.m. in Salzburg.

The COVID-19 pandemic and the resulting massive decline in global air traffic continues to be more than evident in the airline industry, but the industry is looking ahead and planning for normal operations with reduced capacity. The global market recovery is forecast to last until at least 2024.

"Today is a ray of hope after the worst aviation crisis in recent decades. Today, Eurowings reaffirms its commitment to the strategic partnership with the airport and to the future of Salzburg as an aviation location. Eurowings has always been at our side, never left us even during the crisis, was always the last carrier to stop flying and was always the first airline partner to return with flight connections to Salzburg. By basing a second Airbus, Eurowings has today fulfilled a promise made before the crisis - a clear commitment to its Austria base in Salzburg", says a delighted Bettina Ganghofer, Managing Director of the airport.

The long-awaited holiday routes to Greece and Spain are already well booked.The flights to Palma de Mallorca and Heraklion are even doing so well that frequencies are being increased. The next few weeks will also see the return of city connections that are so important for Salzburg's economy, such as Düsseldorf (from June 20 WED, FRI, SUN) and Hamburg (from July 1 THU, SUN).

In the first half of July, the HUB connection to Frankfurt will also start up again and with the beginning of the Salzburg festival, "double-daily flights" are planned. Berlin and Cologne will follow in September!
"Even though we have been able to restart flights to the sun and to important cities in Europe, the entry regulation must now be adapted quickly. At present, only 40 countries are listed, and important countries and holiday destinations are still not listed in Annex A of the Entry Regulation. I appeal therefore to the ones responsible in Vienna to extend this appendix A as fast as possible," says Deputy Governor and Supervisory Board Chairman Dr. Christian Stöckl. In any case, airports, airlines, tour operators and accommodation providers are looking to the future with cautious optimism. Destinations in Europe can now be reached again and the gradual normalization of international air traffic will not be long in coming.

The Eurowings Europe Managing Director also took today as an opportunity to attend the stationing of Eurowings' second Airbus in Salzburg. "Salzburg is an important link in our pan-European route network. We are very pleased to base the second Airbus in Salzburg today. After the popular Eurowings vacation flights, city connections are now also returning", said Robert Jahn, Managing Director of Eurowings Europe.
"We are not only strengthening our existing European network, such as here at our Austria base in Salzburg, we are also expanding strongly at other locations: Just a few days ago, we announced the opening of our new base in Prague. We will be stationing two Airbus A320s there from October, and next summer there will even be three aircraft taking off for Eurowings from Prague", Jahn continued. Among airline passengers, Eurowings is one of the most punctual and popular carriers in Europe and ranks among the best in terms of customer satisfaction.

Eurowings, Lufthansa subsidiary and leading holiday carrier, has also added a new bestseller to its product range: Passengers on Eurowings flights have the option of booking free middle seats in the rear rows of the aircraft for as little as 10 euros - whether for comfort or hygiene reasons.

About Eurowings
Eurowings is the holiday airline of the Lufthansa Group and thus part of the largest aviation group worldwide. Eurowings is the market leader at Düsseldorf, Hamburg, Stuttgart and Cologne/Bonn airports and currently has a fleet of around 100 aircrafts. Eurowings focuses on low-cost products and services and offers non-stop flights within Europe. In its summer flight schedule, the airline currently flies to more than 100 destinations. With its extensive route network and soon ten international bases - including Europe's number one vacation island, Palma de Mallorca - Eurowings is one of the leading vacation airlines in Europe. Eurowings currently employs around 3,000 people across Europe.

The crew cannot wait to welcome the first passengers