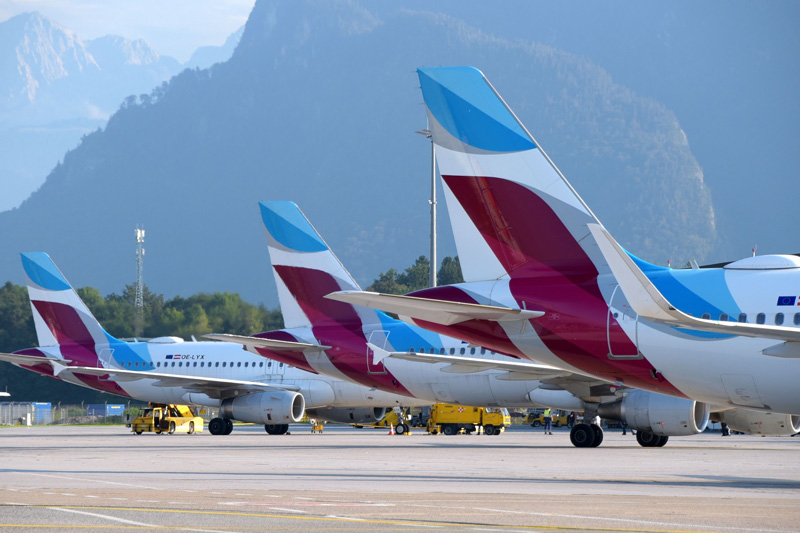 A third Airbus will be based at Salzburg Airport shortly

"Salzburg is our largest and most important base in Austria. Therefore I am very pleased to be here today and to take the opportunity to discuss new prospects with our airport partner. The desire to travel is huge after this long lockdown winter – across all of Europe. We are currently seeing a significant rise in bookings and can expect a strong comeback in tourism in 2022 as soon as further travel restrictions are eased. Eurowings is increasingly focusing on Salzburg: with three Airbus aircrafts soon to be stationed here, we are significantly expanding our commitment in the city of Mozart, so that passengers  will be able to fly to 15 attractive destinations in summer at low cost without having to change planes”, says Eurowings CEO Jens Bischof.

The Eurowings routes are well booked and the German market remains the most important one for Salzburg Airport. More than a third of all arriving and departing passengers use flight connections from Salzburg to Germany.

„Eurowings is the perfect partner for Salzburg. Since the start, we have worked hard together to find the right setup for our region. This has been a great success and Eurowings has really developed into our home carrier, in city traffic, for business travelers and holidaymakers. We have now seen how well this works during the crisis, when Eurowings has remained loyal to us in an impressive way. They were the first to resume flight operations at every single lockdown and I would like to thank them for their trust and commitment”, says Bettina Ganghofer, Managing Director ot Salzburg Airport, at the management working meeting.

Since the demand for bookings is fortunately increasing significantly, there is also a strong need for junior staff. The German Lufthansa subsidiary recently announced that it was looking for 750 new flight attendants and pilots. The business units on the ground are also looking for new talents woh want to expand the holiday flight sector together with Eurowings.

„We are basing a third aircraft here in Salzburg, which not only means an additional aircraft, but also more jobs in Salzburg! We have initiated an offensive throughout the company to promote the training of young people. Our employees and their further training have top priority for Eurowings”, says Eurowings Europe CEO Stefan Beveridge.

Jens Bischof
On March 1st, the former CEO of SunExpress, Jens Bischof, took over as CEO of Eurowings. Bischof started his career at Lufthansa in 1990 with Lufthansa Cargo. From 2006 to 2011, he was responsible for Lufthansa’s passenger business in North and South America, after which he took over Lufthansa’s global sales organization as Board Member for Passenger Business and Chief Commercial Officer. In his three years as CEO of SunExpress, the company was successfully realigned, expanded and positioned economically, under his leadership. Bischof is a father of two, holds a masters’s degree in management form Canada’s McGill University and is a member of serveral supervisory boards.

Stefan Beveridge
Stefan Beveridge started his career with an apprenticeship as an air traffic clerk at Deutsche Lufthansa. While working, Beveridge completed a bachelor’s degree at the USAL (Universidad del Salvador) and at the EBS (University of Law and Economics) as well as training as a pilot. Before he took over the position as CEO of Eurowings Europe in June 2021, he worked in many different fields at Lufthansa and Austrian Airlines. Until 2021 he also worked as a pilot with a rating for Dash-8 and B777.