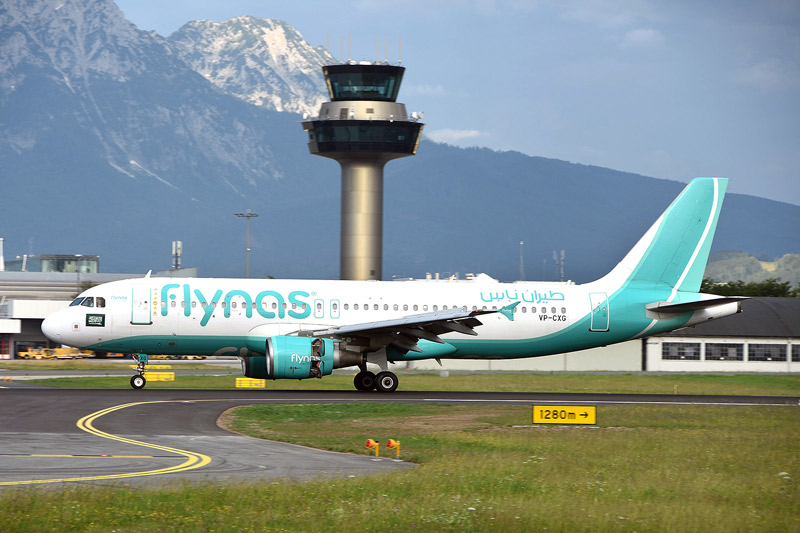 From May 19th 2020, the Arabian airline flynas will start operating flights from Salzburg / 6 weekly flights to Saudi Arabia / Salzburg gets a new airline partner for important new routes / Long history of Arabian guests in Austria

At the beginning of 2019, Bettina Ganghofer, CEO of Salzburg Airport, announced at a press conference that Salzburg Airport was working hard on expanding the flight program as well as establishing new routes and further connections to big hubs. Now we have good news: In the future, the Arabian region will be connected NONSTOP with Salzburg. „When I announced in 2019 that we were planning to give the cooperation with our airline partners and tour operators a real boost, we had a plan. So now from plans to deeds! We now have the first NONSTOP connections to the Arabian market with flynas and the connections to Riyadh and Jeddah. We have not only set an important milestone with these two destinations, but this also makes it easier for guests, who had to use more distant airports, to come to Salzburg“, says Bettina Ganghofer, CEO of Salzburg Airport.

„As second largest airline of the Kingdom of Saudi Arabia, flynas has been flying passengers to Austria quite successfully since 2018. The demand of Saudi Arabian holidaymakers to visit Salzburg and its region is rising every year. I am convinced that many Austrians will also use the opportunity to visit Saudi Arabia with its unique sights“, saysBandar Al Muhanna, CEO of flynas.The Arabian airline was founded as Nas Air in 2007 and received its current name in 2013. The airline offers more than 1.200 weekly flights to 17 national and 53 international destinations. Since its foundation, the carrier has transported more than 43 million passengers.

„Salzburg Airport is working hard to establish new flight connections and destinations, in order to create an attractive location. With the new flights to the Saudi Arabian region, Salzburg Airport has scored a real coup. Saudi Arabia is becoming more and more important, both for domestic companies and holidaymakers. The new flight connections save Arab guests a long journey to their holiday destinations via Munich or Vienna by allowing them to land in and depart directly from Salzburg and spare the environment as well. Statistics show that Arab guests are not only especially comfortable in our region, but they are also a financially strong clientel.  I am very pleased that Salzburg Airport was able to realize its plans to establish these new routes and I would like to thank the entire team for its great commitment“, says Christian Stöckl, Chairman of the Board.

Operating to Riyadh and Jeddah means operating to the two most important cities oft he Kingdom of Saudi Arabia. Riyadh, which has been the Capital of the Kingdom since 1932, is a vibrant metropolis with nearly 6.7 million inhabitants and is located in the middle of the Arabian Peninsula. As economic, administrative and cultural centre of the country, Riyadh is the seat of the Saudi Arabian government, of parliament and all central state authorities. In addition, the city also benefits from universities, museums, historic buildings as well as numerous diplomatic missions. Jiddah is a multicultural city with about 4.5 million inhabitants, situated at the Red Sea and is considered to be the gateway to Mecca, the religious centre of Islam.

„All year round we are in close contact with many airlines, checking, which routes would be sensible and economically viable for Salzburg as well as the source market. I am convinced that the connections to Saudi Arabia will also be interesting for many people in Salzburg and Bavaria. Thanks to the new tourist visa, which are now available electronically
within minutes, Saudi Arabia can be visited much quicker and easier than ever before“, says Authorized Officer and Divisional Head Aviation & Sales, Christopher Losmann.

Arabian guests are essential for the touristic added value of the Province of Salzburg. Expenses of more than 450 Euros per day and person as well as above average stays, boost the local economy.

„We are very happy that Salzburg Airport is extending its offer and that flynas is now offering attractive NONSTOP-flights to Salzburg from Riyadh and Jeddah. Saudi-Arabia is a small, but profitable market, which developed well in the past years. Currently, we count about 65.000 arrivals from Saudi Arabia every year. The Arabians, suffering from enormous heat in their home country, love Salzburg for its nature and the pleasant alpine climate. 90 percent of all guests arrive in the summer semester“, says Leo Bauernberger,CEO of SalzburgerLand Tourismus GmbH.