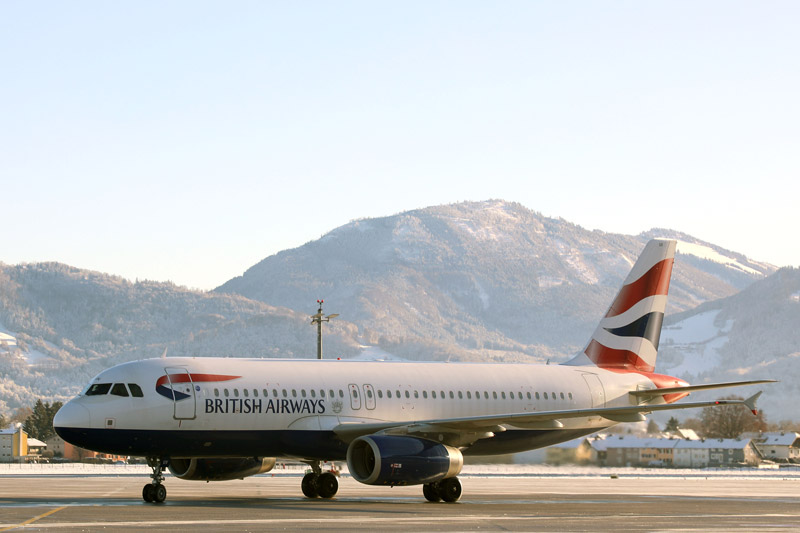 With today's first landing of our premium partner British Airways, Salzburg Airport starts the winter season full of confidence and optimism. With immediate effect, the British national carrier will connect Salzburg with the British capital London several times a week. "Finally, we can look forward to the upcoming winter season 2021/2022. With London Heathrow, British Airways is starting the ski season, which is extremely important for Salzburg," says airport procurator Christopher Losmann. "After the complete cancellation of last year's winter season and the challenging last months, we are looking forward to many visitors from all over Europe. The flight registrations of our airline partners make us quite optimistic, although the developments still depend very much on the pandemic and the associated restrictions," Losmann continues.

After the landing ban for aircrafts from Great Britain, the British Airways flight landed at Salzburg Airport on time after having paused for 357 days.
The flight program from Salzburg also has plenty in store for those, who would like to flee from the cold. With Eurowings, passengers can travel from Salzburg to Tenerife and Gran Canaria until well into May as well as to Egypt.

With flydubai, passengers can fly directly to Dubai or discover numerous destinations in the global Emirates route network. The Maldives, The Seychelles or Sri Lanka can easily be reached from Salzburg, after a short stopover in Dubai.

The German metropolises of Berlin, Düsseldorf, Hamburg and Cologne have been well connected to Salzburg for some time now. Eurowings and easyJet bring passengers to the important German cities several times a week. Lufthansa also connects Salzburg with Frankfurt up to three times a day - and via the international hub on to exciting destinations all over the world. Passengers can also take advantage of numerous onward flight options with Turkish Airlines, which flies to Istanbul several times a week.

With Amsterdam, Salzburg Airport has the next major HUB in its flight program. Transavia flies s to the Dutch capital serveral times a week as well as to Rotterdam and Eindhoven. In addition to British Airways (London Heathrow), easyJet (London Gatwick) and Ryanair (London Stansted) also fly to the British capital. From January 2022, BA Cityflyer will also offer flights to London City Airport. A new airline partner with a new destination is flyr, which connects Salzburg with Oslo! The winter flight program is rounded off with the flight connection to the Icelandic capital Reykjavík, which is offered by Icelancair and Play.
Find more information about our flight program

The crew was also happy to land in Salzburg

The first guests deboarding the plane