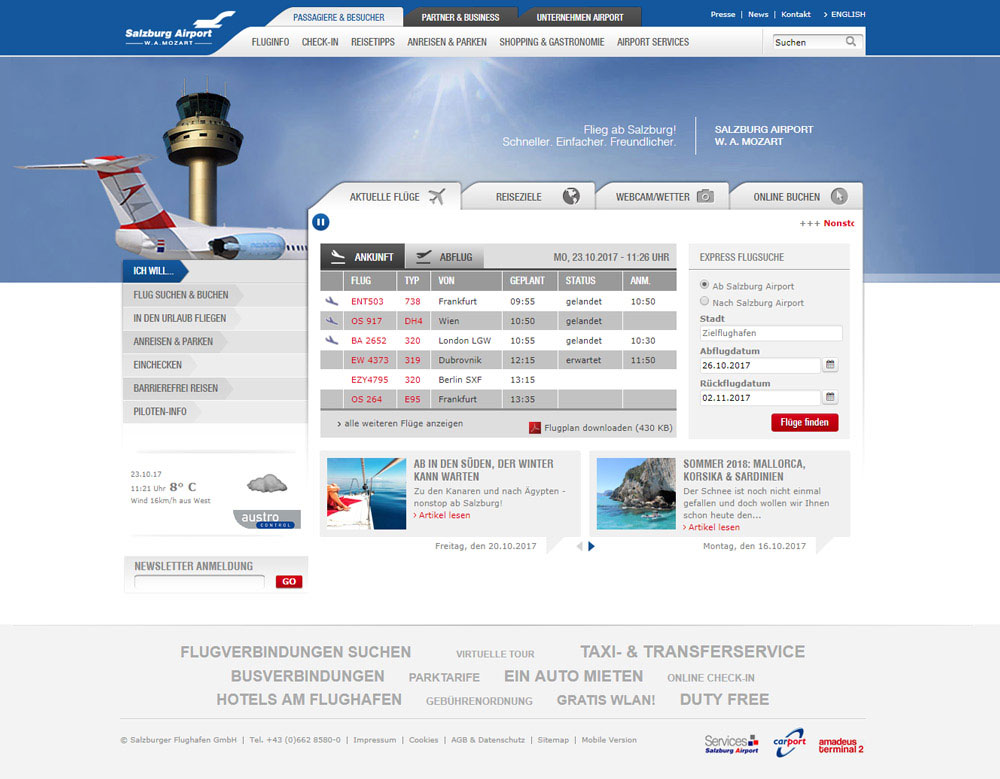 When the first Salzburg Airport website went online in 1997, the airport practically was a pioneer. In the early days there was only one computer at the airport, which had internet access. The use of this technical equipment was only possible, when accompanied by the manager of the IT-department. At that time fax, telex, letters and the good old typewriter were “state of the art”.

“Thinking of tomorrow is and was as important as ever. As early as 20 years ago, the airport was on the right track in the field of modern information technologies. I am very much looking forward to the website being relaunched in the beginning of 2018! Customers want to be informed quickly and easily, with suitable contents, which range from keeping messages to the point to detailed information.  A website should be both, informative and appealing, in order to be favoured by customers”, says Bettina Ganghofer, CEO Salzburg Airport.

Once online, the airport website still couldn´t be found at the end of 1997. The point here is that the search engine Altavista didn´t go online until about a month later. As part of an internet support program, the domain www.salzburg-airport.com  was announced on March 25th 1997 with TABNet. TABNet at that time was the most important domain registration authority worldwide. The company TechConsult which later become Conova designed the first website for Salzburg Airport. Today about 2.200 users visit the website daily.

“A year before Google revolutionized the internet, Salzburg was the first Austrian airport to have its own website. We realized – even back then – that computers and the web would become increasingly important in the future”, says Elisabeth Haslinger, Manager Internet and Online Media.

Over the last two decades, the website has been relaunched a couple of times – last in 2011. The agency pixelart not only designed a desktop, but also a mobile version. In 2008 there had already been a quite simple version for mobile devices. Salzburg Airport was the first airport in the German-speaking area to offer weekly previews of its take-offs and landings online and was one of the first European airports to have a their own webcam. Today Salzburg Airport is also present on social networks.

The Internet site of the airport was awarded several times at the TAI Tourist Austria Advertisement Grand Prix (2007, 2008 and 2012). The website was voted  as “The most popular Austrian airport website” by readers  of austrianaviation.net voted the website, which clearly shows the userfriendliness of the site.