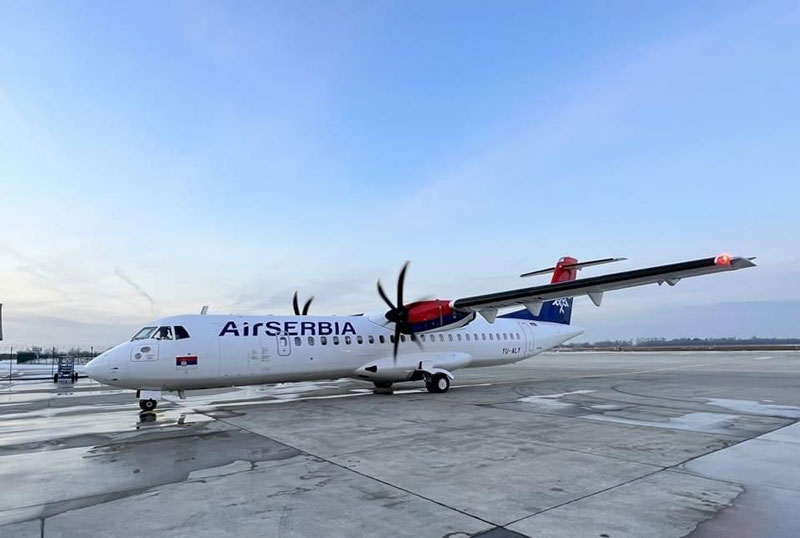 On August 2nd, 2019, Air Serbia launched the Salzburg - Niš city connection. Even then, the cornerstone was laid for further development of the good partnership with Serbia's national carrier, Air Serbia. In the midst of the Corona Pandemic, which is a difficult time for the international aviation industry, another milestone in the cooperation with Air Serbia could be set - Salzburg will be connected with Belgrade from the beginning of June 2022, starting with three weekly flights.

"Already in 2019, we were overjoyed to establish a good and important connection to Serbia with Niš. The new connection to the HUB in Belgrade could be realized with Air Serbia due to the good experiences with Niš in the past. This new flight connection to the capital of Serbia is not only a great city connection, it is a further expansion of our HUB airport network. In addition to the HUBS in Frankfurt, Istanbul, Dubai, Amsterdam, Düsseldorf, Belgrade has now been added! These are good omens for the current business year," says airport CCO and Chief Commercial Officer, Christopher Losmann.

Air Serbia was one of the airlines with which Salzburg Airport made a fresh start in 2019 after the general runway renovation, and now airline partners such as Eurowings, Lufthansa, Turkish Airlines and Air Serbia are flying out of the pandemic together with Salzburg Airport.  From the beginning of June, the new connection to the Belgrade HUB will be launched, making destinations such as Bucharest, Sofia, Tirana, Thessaloniki, Athens and many others in the Air Serbia network quickly accessible from Salzburg.

“The introduction of flights to Salzburg confirms our commitment to improve connectivity between Serbia and Austria, which represents a significant market for our country due to the sizeable Serbian diaspora, but also offers great opportunities for city break and skiing holidays,” stated Bojan Aranđelović, Head of Network Planning and Scheduling at Air Serbia.

Air Serbia will be operating flights to Salzburg, its second destination in Austria, three times a week during summers and twice weekly during winter. In this way, good connections will be provided via Belgrade between the popular Austrian city and other destinations in the network of the Serbian national airline, such as Athens, Bucharest, Dubrovnik, Istanbul, Larnaca, Podgorica, Sarajevo, Skopje, Thessaloniki, Sofia, Split, Tirana and Tivat. Previously, Air Serbia operated flights from Salzburg to Niš two times a week.

Belgrade
The "white city" Belgrade is Serbia's capital and is located where the Sava River and the Danube River meet. Belgrade is one of the oldest cities in Europe and visitors are reminded of Berlin in the 80s or 90s in many corners of the lively city. Belgrade is in a constant state of change and is also becoming increasingly popular with tourists. Meanwhile, about 1.7 million people live here, nobody gets stressed and a relaxed and stress-free vacation is pre-programmed.  However, in the white city - as "Beograd" means in Serbian - this actually only applies during the day. In the evening, the city pulsates and Serbia's metropolis becomes colorful and lively on all corners. In addition to the classic bars in the city, the so-called splavs - huge rafts lined up along the two rivers Sava and Danube - are the meeting places of Belgrade's social life. Everywhere there is construction and redesign, creative and artistic quarters are emerging, but also renovations of the old, partly destroyed buildings - testimonies of an eventful past - accompany the visitor of Belgrade.

About Air Serbia
Air Serbia was launched under that name in October 2013 as the national airline of the Republic of Serbia. From three airports in Serbia (Belgrade, Niš, Kraljevo) it flies and plans to fly to 60 destinations in Europe, the Middle East, North America and Africa, in passenger and cargo traffic. The airline also offers long-haul and international destinations in Asia, Australia, North America and Africa via its codeshare partners. Air Serbia’s fleet includes one wide-body, 9 narrow-body and 5 turboprop aircraft. Find more information about the activities of the Serbian national airline at Air Serbia Media Centre.