Air Serbia lands in Salzburg for the first time 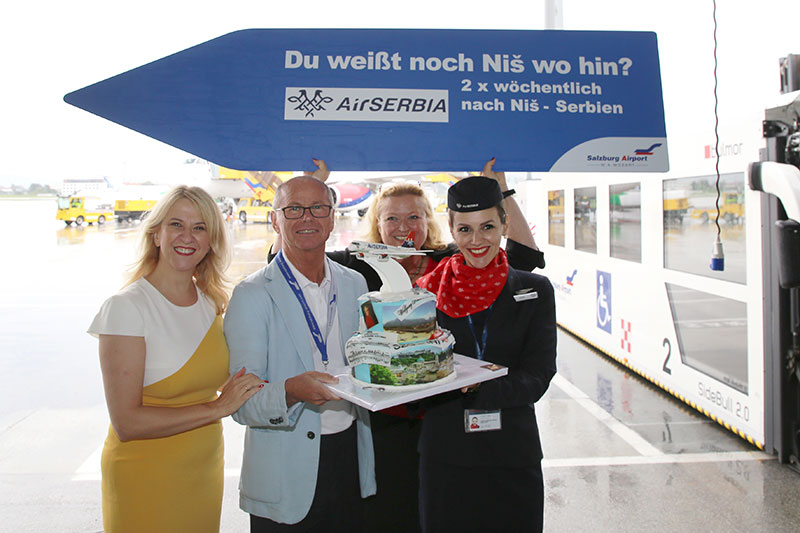 A special cake for a special event

Today, August 2nd, the first Air Serbia-flight landed in Salzburg. The new flight connection from Salzburg to Niš has great potential, since there are several interesting destinations, which can be reached within a 200-300 kilometers radius from Serbia´s second-largest city.

„A flight connection to Serbia at last! Air Serbia ensures a quite interesting mainstay in Eastern Europe. This fascinating new destination not only expands our flight program, it is also a brand-new destination that will please our passengers from Salzburg and Bavaria“, says Bettina Ganghofer, CEO of Salzburg Airport.

Part of the ceremony on the occasion of the first landing was a water arch created by two of the airport´s fire-fighting vehicles and music. The guests were welcomed on the restaurant terrace “Das Wolfgang”, which has just recently opened.  Bettina Ganghofer, CEO of Salzburg Airport and the Serbian Consul General, Svetlana Stankovic, welcomed the first guests arriving from Niš. After the aircraft had landed, the invited guests made use of the opportunity to exchange views on the economic and touristic potential of the new destination.

"We are very pleased to be connecting Salzburg to Niš. Our priority is to offer good service at affordable prices, as well as to make it possible for residents of both region to fly at best possible conditions. We are certain that better connections to Austria will contribute to the strengthening of commercial activities and tourism between our two countries" – Duncan Naysmith, Air Serbia's CEO, stated at the occasion.

The Consul General of the Republic of Serbia, Svetlana Stankovic, who was born in Niš, is especially pleased about the direct flight connection from Salzburg to her hometown. When she accepted the position as a Consul General in 2017, a good connection to Serbia was one of her top priorities:

“The first direct flight connection from Salzburg to a Serbian city! This connection to Niš offers new opportunities for deepening the relationship between relationship between Austria and Serbia, which already have a solid basis. This route will have a positive effect on economic collaboration and tourism and will improve cultural exchange”, says Svetlana Stankovic, Conusl General of the Republic of Serbia.

Among the invited guests was Dr. Franz Schausberger, Chairman of the Executive Board of IRE, Institute of the Regions of Europe, who was appointed Special Advisor for Enlargement Countries in 2016.

“The new direct connection allows the region around Niš in the Southeast of Serbia to establish further trade cooperations and can be a driving force for tourism, which also demonstrates trust in Salzburg as a location. I hope that the connection between these two important European regions will be used intensively, which may link Serbia even closer to the EU”, says Franz Schausberger, Chairman of the Board of IRE and Special Advisor of the EU Commission for the Western Balkans.

With 280.000 inhabitants Niš is the third largest city in Serbia. Niš  is an important industrial and commercial city as well as the seat of the Orthodox Bishop. Besides universities, a symphonic orchestra, museums, theatres and cultural facilities, Niš is very attractive due to its ideal location betweein Priština (300 km), Belgrade (230 km) und Novi Sad (300 km). Especially the Fortress, which was built by the Ottomans on the remains of a Roman military camp, is a popular sight and meeting point for both, the young and the old.

Air Serbia, the National Carrier of the Republik of Serbia, was founded in 1927. The airline has been through various ups and downs, until Etihad offered to become a major shareholder of the Airline in 2013. Today Air Serbia is operating flights to 40 destinations in Europe, the Mediterranean, the Middle East and Northern America. With its cooperation with Etihad Airways, passengers can also reach destination in Asia, Australia, America and Africa.

Air Serbia landed with an Airbus A320

Svetlana Stankovic, Consul General of the Republic of Serbia, was especially happy about the new flight connection