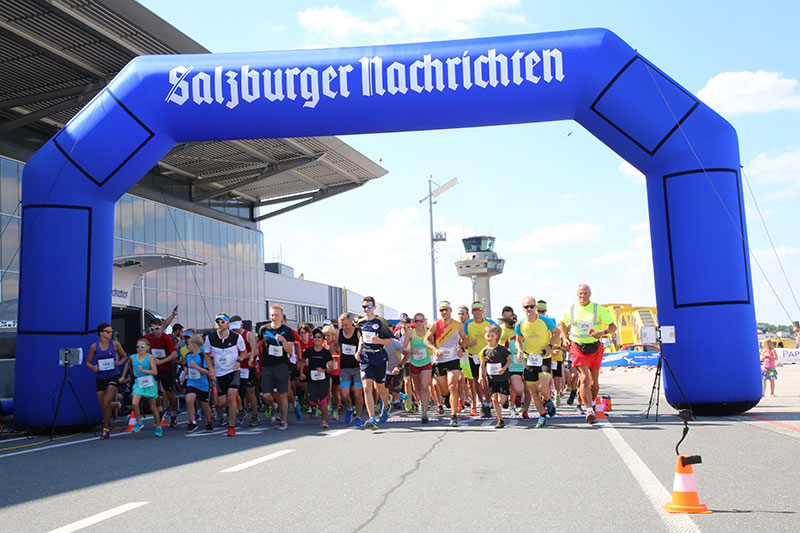 410 athletes ran for a good cause

As in previous years numerous runners took part in this very special running event in the splendid setting of the airport. 410 athletes started for a good cause.
On the circuit situated next to the runway, a total of 5,146 kilometers were completed within 1.5 hours by all the participants. The entry fee - together with a certain sum for each kilometer provided by the airport – benefited a charity project of the Lebenshilfe Salzburg.

Several celebrity athletes put on their running shoes and took on the challenge: among them being Deputy Governor Christian Stöckl, Vice Mayor Bernhard Auinger and Andrea Fischbacher.  The starting signal was given by Bettina Ganghofer, CEO of Salzburg Airport, and ex-ski downhill racer, Alexandra Meißnitzer.

“I am very pleased to see how many athletes and employees support this great project and put on their running shoes for a good cause. One of my utmost concerns is promoting social commitment and I can tell from the number of participants that the same is true for many other people”, says Bettina Ganghofer, CEO of Salzburg Airport.

The prize-giving-ceremony was not about awarding the fastest runner or the one who had completed the greatest distance, it was about the people from the residential project of the Lebenshilfe in Wals. Mr. Schiechl, Head of the Lebenshilfe Salzburg, received a cheque for the amount of € 10.000.

The money will allow the Lebenshilfe to organize a holiday at a farm for the people from the residential project in Wals.

Among the runners was Vice Mayor Bernhard Auinger

Deputy Governor Christian Stöckl und Bettina Ganghofer, CEO of Salzburg Airport, presented the cheque in the amount of € 10.000 to Kurt Schiechl from the Lebenshilfe Salzburg

The runners enjoyed the special location

The weather was ideal

While aircrafts were landing, the athletes were running for a good cause

The professional fire department ran in their uniform

Some people even ran in a Dirndl

The athletes were definitely thankful for a cooling