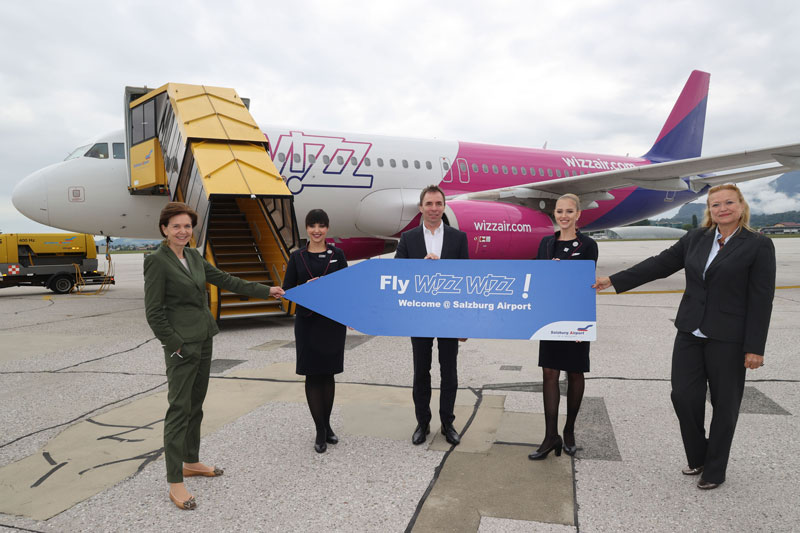 President of the State Parliament of Salzburg, Brigitta Pallauf together with József Váradi, CEO of Wizz Air and CEO of Salzburg Airport Bettina Ganghofer

Wizz Air, the leading low-cost carrier in Central and Eastern Europe and Europe’s greenest airline*, today announced the addition of Salzburg to its extensive route network. From July passengers can travel from Salzburg Airport to Larnaca, Kiev, Bucharest, Belgrade, Tuzla and Skopje. Tickets to these destinations can already be booked on wizzair.com and in the airline’s mobile app from as low as EUR 14.99**.

“Wizz Air is coming to Salzburg and this during these difficult times! This is not only an important signal for us and the entire market, it also emphasizes the value of the region. There has always been a high demand for direct connections to Eastern Europe, which we will now be able to offer”, says Bettina Ganghofer. “I am completely convinced that all these destinations will be well received by our market”, Bettina Ganghofer adds.

The launch of Wizz Air’s operations at Salzburg airport underpins the airline’s long-term commitment to Austria. The two years of successful operations and the more than 3 million passengers in Vienna have proved that Wizz Air offers very competitive and popular services in Austria. Building on this success and on the growing market demand, the airline is adding Salzburg to its ever growing route network and bringing affordable travel opportunities to Salzburg and the region. The announced routes will add over 200 thousand seat capacity to Salzburg Airport annually and will connect the city and the region with currently unserved destinations. The airline will contribute to the development of the region’s tourism while providing low fare high quality travel opportunities.

“After first contacting WIZZ Air personally in August 2019, I am more than pleased that WIZZ is now starting service from Salzburg. This is a clear and essential signal for the entire Province of Salzburg as well as its neighboring regions. Not only tourism is waiting for the return of guests, also other sectors like the economy and the industry are happy about new flight routes. These new routes not only allow tourists and business partners to reach Salzburg quickly, but also company establishments in other countries can be easily connected with Salzburg. Especially during the current Covid-19 crisis, WIZZ Air is a bright spot for many important companies in the province. After a massive decrease in passengers and destinations due to Corona, these new routes start at the perfect time and will help Salzburg Airport to gradually return to normality”, says Deputy State Governor and Chairman of the Board, Dr. Christian Stöckl.

Talking at the press conference in Salzburg today József Váradi, CEO of Wizz Air Group said: “Today’s announcement  underpins our long term commitment to Austria. I am delighted to announce the addition of Salzburg to our route network just three weeks after adding new routes to our Vienna network. Wizz Air is devoted to developing the airline’s presence in Austria, and offering more affordable travel opportunities now from Salzburg as well. Our enhanced health and safety protocols ensure the most sanitary conditions possible on Europe’s greenest fleet. I am confident that Wizz Air’s ultra-low fares and great route network will contribute to the ramp up of  tourism in Salzburg and the rest of Austria.”

Wizz Air is an investment grade credit rated airline, with a fleet of an average age of 5.4 years comprising of the currently available most efficient and sustainable Airbus A320 and Airbus A320neo family single aisle aircraft. Wizz Air’s carbon-dioxide emissions were the lowest among European airlines in FY2019 (57.2 gr/km/passenger). Wizz Air has the largest order book of 268 aircraft of the state-of-the-art Airbus A320neo family which will enable the airline to further reduce its environmental footprint by 30% for every passenger until 2030.

Today’s announcement comes as the new era of sanitized travel begins at Wizz Air. The airline recently announced a range of enhanced hygiene measures, to ensure the health and safety of its customers and crew. As part of these new protocols, throughout the flight, both cabin crew and passengers are required to wear facemasks, with cabin crew also required to wear gloves. Wizz Air’s aircraft are regularly put through an industry-leading fogging process with an antiviral solution and, following WIZZ’s stringent daily cleaning schedule, all of the airline’s aircraft are further disinfected overnight with the same antiviral solution. Sanitising wipes are handed to each passenger upon entering the aircraft, onboard magazines have been removed from the aircraft, and any onboard purchases are encouraged to be made by contactless payment. Passengers are requested to follow physical distancing measures introduced by the local health authorities and are encouraged to make all purchases prior to the flight online (e.g. checked in luggage, WIZZ Priority, fast security track), to minimize any possible physical contact at the airport. Click here to view Wizz Air’s new health and safety video, for more information.

By adding WIZZ Flex to a booking, passengers can rest assured that if circumstances change, or they simply wish to travel on a different date, or to a different destination, they can rebook on any WIZZ flight of their choice. Providing that extra layer of protection for passenger bookings, is a peace of mind during these uncertain times.

About Wizz Air
Wizz Air, the largest low-cost airline in Central and Eastern Europe, operates a fleet of 122 Airbus A320 and A321 aircraft. A team of dedicated aviation professionals delivers superior service and very low fares, making Wizz Air the preferred choice of 40 million passengers in the financial year F20 ending 31 March 2020. Wizz Air is listed on the London Stock Exchange under the ticker WIZZ. The company was recently named one of the world’s top ten safest airlines by airlineratings.com, the world’s only safety and product rating agency, and 2020 Airline of the Year by ATW, the most coveted honour an airline or individual can receive, recognizing individuals and organizations that have distinguished themselves through outstanding performance, innovation, and superior service.
For more information:

WIZZ Air is operating to Salzburg!

WIZZ Air has landed in Salzburg

Before the departure of the aircraft