Reorganisation of Austrian Airlines and Eurowings in Salzburg 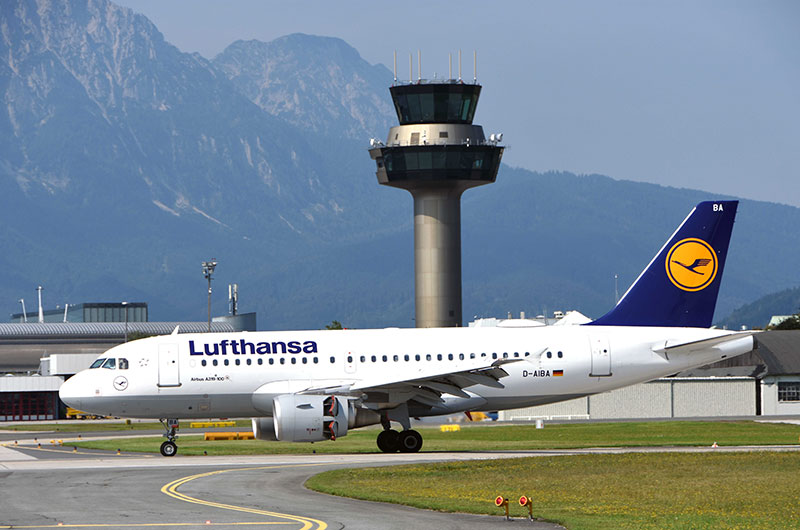 Salzburg-Frankfurt: in the future this route will be operated with an Airbus A319

Salzburg-Frankfurt: in the future this route will be operated with an Airbus A319
Home The Airport Company News & Press News Reorganisation of Austrian Airlines and Eurowings in Salzburg

Since the beginning of 2017, Eurowings has stationed an aircraft in Salzburg, successfully operating scheduled and charter flights from here. As a reliable airline-partner, Eurowings has operated 12.600 flights with 1.8 million seats from and to Salzburg so far. The airline is continuing this success story together with Salzburg Airport: By May 2020, two further aircrafts will be stationed in Salzburg (in addition to the one already based in SZG), which means that next summer, there will be 3 Airbus A319 stationed in Salzburg. This decision by the Lufthansa group clearly strengthens Salzburg Airport, which is beside Vienna the second Eurowings base in Austria, and sends out a strong message for the future in Salzburg.

“Stationing a total of three Airbus A319 shows the strategically important role that Salzburg and Austria have as an aviation location, especially for us as a leading European point-to-point-airline”, says Robert Jahn, CEO of Eurowings Europe. “Passengers flying from Salzburg benefit twice: one with an increased capacity of city flights to Hamburg, Dusseldorf, Cologne and Berlin. In addition, we bring holidaymakers to a great number of attractive sunny destinations.”

An airport and its airline-partner together with tour operators, take care of establishing flight routes and developing traffic. An essential partner in this field is TUI Austria. As one of the most important tour operator partners in Salzburg, the corporate group offers 17 cruise liners, more than 300 self-owned hotels, 6 airlines and 1.600 travel agencies.

“Eurowings and Salzburg Airport are ideal partners for generating further growth in the West of Austria. We offer our guests next summer exclusive routes like Karpathos and Antalya NONSTOP from Salzburg Airport”, says David Szabo, Manager Flight- and Product Management TUI Austria.

The last two years were dominated by a quickly changing market due to radical events like the insolvency of Air Berlin and the challenges of the summer of 2018.
“Together with Eurowings we successfully established and developed new routes, which led to a solid partnership. This joint work has now been rewarded with the stationing of three aircrafts from summer 2020 – an excellent outcome for the entire team”, says Christopher Losmann, Divisional Manager Sales & Aviation.

“This is great! But, the actual challenge is yet to be faced. The market has to accept this wonderful increase in offer. Our partners want and have to be successful with our location”, is Bettina Ganghofer, CEO of Salzburg Airport, convinced.

Salzburg – Frankfurt – in the future with an Airbus A319
In January 2019 Austrian Airlines announced that they would take the smaller turbo-prop-aircrafts out of service until 2021, upgrading their fleet from 36 to 46 Airbus-aircrafts. What does this mean for Salzburg? In a first step, Austrian Airlines will reorganize the Salzburg-Frankfurt route within the corporate group to transfer the route to Lufthansa on January 5th 2020. Note: This change means a significant improvement for the route Salzburg – Frankfurt. The 4 daily flights are estimated to be offered at the same times, but with a significantly increased seat capacity.

“The results are impressive! Eurowings made 3 on 1 and Lufthansa is offering an Airbus A319 for the premium route to Frankfurt! This is a clear commitment of the Lufthansa group to Salzburg and the development opportunities for the location and the region”, says Bettina Ganghofer, CEO of Salzburg Airport.

Eurowings & Austrian Airlines
Eurowings is a low-fare-carrier of the Lufthansa group and part of the worldwide largest aviation company. With a fleet of currently 180 aircrafts, they have specialized on cost-effective NONSTOP flights within Europe. The German carrier operates to more than 210 destinations in more than 60 countries worldwide. Last year the company with its 9.000 employees transported over 40 million passengers.
Austrian Airlines is Austria´s leading airline and offers about 130 destinations in its route network. Austrian and its 7.000 employees from 58 nations transported about 12 million passengers last year, is part of the Luthansa group and is in addition member of Star Alliance.

TUI Austria
TUI Österreich GmbH is part of the TUI group, the globally largest tourism company.  Beside TUI and Gulet, numerous other brands like TUI Cruises, TUI Magic Life, Robinson, Wolters, Gebeco, TUI Ferienhaus or TUI Ticketshop are offered in Austria. TUI Austria is a 100% subsidiary of TUI Austria Holding and employs about 630 employees and has more than 66 travel agencies.