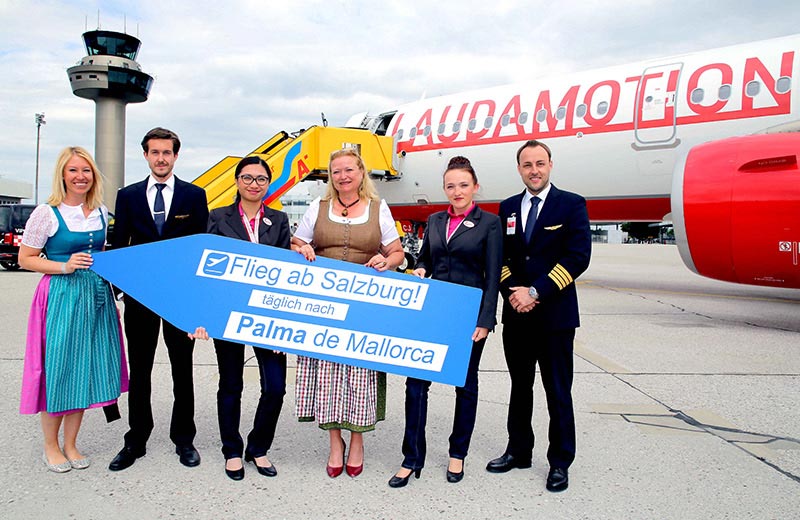 Niki Lauda has always had  a close connection to Salzburg, whether it was with Lauda Air, which lateron become part of Austrian Airlines or NIKI (which was bought by Air Berlin) – Salzburg has always been point of focus in the route planning of his airlines. The same is true for Laudamotion. Everything Niki Lauda touches appears to work and Salzburg is going to be a part of this success story!

“Laudamotion is offering very attractive fares, starting at € 9.90 for a flight from Salzburg to Palma de Mallorca. Together with his airline-partner Ryanair, the Austrian racing legend is conquering the European market. We are very happy to be part of the route network of a young airline and I am convinced that this daily flight to Palma de Mallorca will only be the beginning. I wish the Laudamotion team all the best and am confident that this offer will be well received in our region”, says Bettina Ganghofer, CEO of Salzburg Airport.

"We are pleased that we are now able to offer flight connections from Salzburg. The access to the worldwide most visited airline-website Ryanair.com, Laudamotion has a top platform at its disposal for more than 60 routes from Austria, Germany and Switzerland”, adds Niki Lauda, Laudamotion.
“We would like to convince passengers with our excellent price/performance-ration and the high quality of our on-bord-service. In addition we offer an extensive route-network and of course, the typical Lauda-service concept”, says Andreas Gruber, CEO Laudamotion.

5 good Reasons for choosing Mallorca for your holidays

2018 is already well under way, holidays are being planned and many Salzburger and Bavarian neighbors are drawn to Spain to one of the most popular islands: Mallorca. We found 5 good reasons, why this is the absolute top holiday destination for this summer:

1. The weather: from March temperatures start rising and reach the magic 20 degrees Celsius mark with mostly sunny and dry days. Offering an average of about 300 days of sun a year, Mallorca really earns the byname “Sunny Island”. Not only summertime attracts with pleasant temperatures, autumn also offers temperatures up to 25 degrees and even in wintertime, it hardly gets colder than about 16 degrees.
2. The right offer for everyone: whether you prefer a package holiday all-inclusive stay, a finca in the mountains, a trendy city apartment or a luxury resort close to a golf course, Mallorca has it all. For those who like to party, the island offers a number of clubs and discotheques. You will also find peace and quiet in the mountainous regions or numerous leisure activities like hiking, biking or watersports.
3. Beaches and bays: Quaint bays and endless sandy beaches attract water lovers as well as those, who would like to spend some time away from the hustle and bustle. Especially the beaches at Platja de Palma and the Bay of Alcudia are worth a trip.
4. The Island – a culinary experience: the Majorcans are said to be very hospitable and joyful people, who may offer hikers a refreshing drink. The Mallorcan cuisine is well known for using a lot of fish, vegetables and garlic. You will find little bars and cafés all over the island.
5. Mallorca guarantees diversity: Even if you know Mallorca, you will find that the island has so much more to offer. The number of museums and galleries will amaze you, there are farmer´s markets in many towns and villages and new restaurants and bars are opening their doors all the time.

The Laudamotion-Story
2017 was a quite turbulent year for the aviation industry. Following the Air Berlin bankruptcy, the airline NIKI, which was a typical holiday carrier, also went bankrupt. Niki Lauda was able to rebuy his former airline from the assets from the bankruptcy proceedings. Since February 2018 Laudamotion flies with the IATA-Two-Letter-Code OE. The current route network includes mainly holiday destinations around the Mediterranean. Besides Niki Lauda, Andreas Gruber is the Managing Director of Laudamotion.

NIKI – a Review
In 2003 the airline Niki was founded and offered numerous holiday destinations with a top modern Airbus-fleet. At the end of 2011 racing legend Niki Lauda sold the majority of his carrier to Air Berlin, yet Niki remained a separate company with its own CEO. Niki assumed an important status as a holiday carrier within the Air Berlin group. In total Niki had 35 aircrafts (21 Airbus and 14 Boeing 737), which TuiFly operated for Niki as a wet-lease partner.