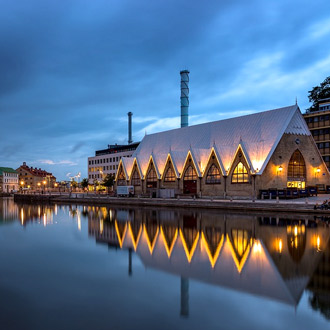 Gothenburg is home to many students, as the city includes the University of Gothenburg and Chalmers University of Technology. Volvo was founded in Gothenburg in 1927. The original, parent Volvo Group and the now separate Volvo Car Corporation are still headquartered on the island of Hisingen in the city.

The city hosts some of the largest annual events in Scandinavia. The Gothenburg Film Festival, held in January since 1979, is the leading Scandinavian film festival with over 155,000 visitors each year. In summer, a wide variety of music festivals are held in the city, such as Way Out West and Metaltown.

The main boulevard is called Kungsportsavenyn, commonly known as Avenyn, "The Avenue". Gothenburg's Haga district is known for its picturesque wooden houses and its cafés serving the well-known Haga bulle – a large cinnamon roll similar to the kanelbulle.