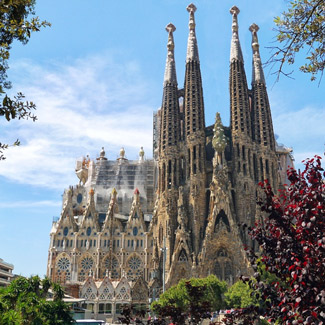 Barcelona is the capital and largest city of Catalonia, an autonomous community in Spain, and the country's second most populous municipality.

The Barri Gòtic (Catalan for "Gothic Quarter") is the centre of the old city of Barcelona. Many of the buildings date from medieval times, some from as far back as the Roman settlement of Barcelona. Catalan modernista architecture (related to the movement known as Art Nouveau in the rest of Europe) developed between 1885 and 1950 and left an important legacy in Barcelona. Several of these buildings are World Heritage Sites. Especially remarkable is the work of architect Antoni Gaudí, which can be seen throughout the city. His best-known work is the immense but still unfinished church of the Sagrada Família, which has been under construction since 1882 and is still financed by private donations. As of 2015, completion is planned for 2026.

Barcelona was also home to Mies van der Rohe's Barcelona Pavilion. Designed in 1929 for the International Exposition for Germany, it was an iconic building that came to symbolise modern architecture as the embodiment of van der Rohe's aphorisms "less is more" and "God is in the details." The Barcelona pavilion was intended as a temporary structure and was torn down in 1930 less than a year after it was constructed. A modern re-creation by Spanish architects now stands in Barcelona, however, constructed in 1986.

Barcelona won the 1999 RIBA Royal Gold Medal for its architecture, the first time that the winner has been a city rather than an individual architect.
(Wikipedia)